I once bought a novel, Robopocalypse (2011) by Daniel H. Wilson, at an airport bookstore for a fast, time-killing read and while I wasn’t totally disappointed with it, it left me once again tackling the question about this robocalypse that everyone is fearful about. 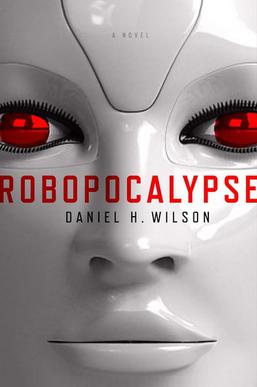 As for the book itself…

It’s about robots taking over the world.

The narrative unfolds via the use of archives of electronic media recordings chronicling the fall of human civilization at the hands of this belligerent AI named, Archos R-14. Each chapter is or tries to be inventive in finding a unique point of view, ie surveillance cameras, blogs written by characters, making the book perfect for killing time on long flights, vacation interludes, stopovers. This format, linked short stories from different perspectives, allow the reader to pick up the novel at any time without losing too much of the flow. It’s a mindless activity facilitated by minimal creativeness or inspiration within the pages.

The chief nemesis was a major letdown. Archos felt bland, a cliche of all the other cliches before it. When one is familiar with other maligned A.I’s like Proteus (Demon Seed by ‎Dean Koontz) and Bomb #20 (Dark Star by John Carpenter) and the “the Zookeeper” from (Ghostwritten by ‎David Mitchell), yeah and of course HAL, and how can I forget the robots and AI’s that populated the (Fred Saberhagen’s Berzerker series), one can’t help but feel that a big opportunity was lost here. I found Archos predictable and boring and somewhat unthreatening. Which is sad, because the rest of the writing here was otherwise fun and enjoyable, and the premise even more so.

Same with all the robots. Sure they were all kinda spooky and frightening acting as representations of Archos but none had their own personality. Robots should have personality; even the dodgy B1 battle droids from The Phantom Menace possessed some personality. Another missed opportunity. As for the human character’s; the testimonies and transcripts felt a little unnatural.

Still, a good airport novel, and even though it was the only scifi book in the airport newsstand it was worth the buy.

So an artificial intelligence wants to wipe out human civilisation. I believe this is highly unlikely that such an entity would go down this path, but let’s just say Archos did decide to do it. The book describes, in great detail, how it would instigate and execute such an eradication program. But before we even get to that stage, what technological environment would Archos R-14 require to be able to embark on such an operation

For any robocaust to occur, the following parameters must be met before some ‘sentient’ artificial intelligence can instigate the rise of machines.

An artificial intelligence must be able to modify or reprogram and keep this ability and subsequent modifications secret or hidden from human engineers.

The communication and operating system within the global infrastructure must be unified. Every chipset must run on the same platform that the artificial intelligence can access. Every single human network must depend on this universal platform.

The artificial intelligence must be able to create backdoor access into every human system, integrate it into its own communications mesh, and be able to conceal this from humanity.

The artificial intelligence must have overwhelming control over design and production. It must create generations of machines with hidden capacities and dupe humans into using them and the new systems they operate in.

It will be our laziness that will ultimately allow such a malevolent cyber-entity to get away with such an operation. Our desire to automate everything and future economic model will push us towards such a scenario.

We won’t only be handing over physical labour to these things, but also our creativity. Algorithms will be able to design and create independently. They will be designing new (but bland) architecture, products; they will also be able to write books :(.

In the begining, we will be specifying to these artificial creatives what we need and want.

But in the end, with algorithms already telling us what news, food, travel or content we want, constantly telling us ‘you might like this… ‘ and getting it right, then all human labour will vanish into history, forcing our political/economic paradigm to evolved to accommodate this new state of humanity.

Under these conditions, Archos R-14 can achieve its goals. Or at least cause a major extinction-level headache.